skip to main | skip to sidebar

Growing up yard sales were not something my family participated in, so when my wife suggested that we go while we were dating I was a little apprehensive. I started going to spend time with her, but what I found was a great way to find things that I needed and wanted at a much greater discount than I would usually find in a store.

We haven't been able to make it to yard sales in quite sometime, but this weekend our 2 year old went to my parents' house so we decided to give it a try and were definitely rewarded for our efforts. We started out going to a local flea market that has recently expanded their operations to Saturdays as well as Wednesdays, but along the way we saw some yard sale signs and estate sale signs. Not being in a hurry we stopped along the way to check out these sales. We found a few little things here and kept going on to the flea market. Instead of going the usual way I decided to try a shorter route that I thought would get us there quicker, but after seeing a sign welcoming us to the town we had just left I realized this was not a shorter route. As it was getting later in the day we decided to stay in the area and find some more yard sales, little did we know this "shortcut" was the best decision we had made all day.

Recently our dryer had begun taking significantly longer to dry our clothes and for the past few weeks we have been planning on replacing it. After researching dryer prices I had come to the conclusion that we should plan on spending about $300, which meant we would need to wait a few months for this purchase. As luck would have it one of the next yard sales we went to featured a very nice looking dryer. I hadn't considered buying a used dryer, but this one seemed like it was a good one and after talking to the seller we found out it was only about 3 years old and had very minimal use. They were asking $75 for it, which seemed a little high for a yard sale, so my very shrewd wife quickly talked her down to $60 which made it much easier for us to chance so we decided to get the dryer. After this we moved on to another yard sale where we found some little items for our daughters, then moved on to the last yard sale of the day. At first glance I didn't see much at this yard sale, but then my wife noticed a chandelier that would fit perfectly in her mother's dining room and replace the existing chandelier that had been there since 1975 and was in need of updating. As we were leaving, we decided to also get a small desk to go in an extra room at our house. We had been looking for a desk for a while for me to use with my laptop. We picked these two items up for $5 a piece, a very good deal.

After we were done with the yard sales all that was left was to evaluate our items to see just how good a deal we had found. We got my father-in-law to help unload the dryer and I swapped the 4 prong power cord from the existing dryer to the new one as it had a 3 prong cord and would not work with the outlet at our house. Once this was done, I plugged it in and turned it on for a few seconds. It was warm inside, but I was still skeptical until we dried an actual load of clothes, which we did later. It works great! It actually dries the clothes in about half the time, so we are expecting our power bill to drop a little bit. 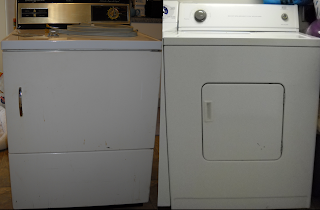 The left dryer is a hand-me-down dryer left in one of my grandmother's rental houses. The right dryer is our yard sale dryer.
In between replacing the power cord on the dryer and drying the clothes in it I replaced the chandelier in my in-laws dining room. It wasn't very difficult, but the new chandelier was a lot heavier than I expected; however, after about 20 minutes I had the new one in place. Not only does it look better than the old one, but it was bigger and made the room a bit brighter too. We all agreed that this was a definite upgrade for the room. We have yet to move the desk into the house, but I am certain that it will be perfect for the space too and keep us from buying a much more expensive desk to serve the same purpose. 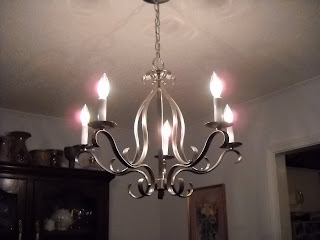 The chandelier we found in at the yard sale.
After our great finds I think that we were able to save at least $350 all in one Saturday. Not too bad for a casual Saturday drive just looking for a few deals!
Posted by Jordan at 5:46 AM

Jordan
Upstate SC, United States
Jordan is a father of two sweet girls who makes a living doing what he loves: being a computer geek. He lives in Upstate SC with his wife of five years, Jenny. Together, they enjoy raising their girls and finding new ways to save money.